The Rise of Jumbotron is the second Quest available to players. It is set in a futuristic-themed world with laser guns and robotic enemies. It is a difficult and long challenge, and if you want to survive you will need to stay near cover and communicate with your teammates.

The #RecRoomOriginal room ^TheRiseOfJumbotron is a #pickup room, i.e., teleporting and "walking" VR players as well as Screen Mode players may play in the same room.

After gathering your team, one of you has to activate the "Start" button by pointing at it with a virtual laser pointer and pulling the trigger of your controller.

You spawn in a dressing room (similar to a futuristic version of that in the Quest for the Golden Trophy) with a mirror on the left wall, some decor and credit-filled monitors along with 4 laser pistols and 4 laser submachine guns on the back wall. You exit the dressing room by gathering all players on the platform and teleporting through the door at the back wall. Remember that you have to reload the laser weapons by pulling the grips back or down, and remember that there is friendly fire. Dead players can be revived by a high five from a player who is still alive.

Entering the Armory, you will find a large open room, and as you move through the room flying bat bots will burst fire 3 fast-moving lasers at you. Moving ahead will spawn more, including two high up at the top to the left, so stay back and kill them all before going ahead. When every enemy has been killed, you will hear a distinct tune, letting you know that it's okay to move to the next area.

Next up is the Cargo Bay, which has ground tread bots, mouse bombs, and the previous bat bots. The tread bots will shoot slow moving orbs at you; however, they often spawn in groups of 5-10, so do not underestimate them. After fighting through some tread bots and bat bots, you will come across a group of mouse bombs, small but fast robots which explode when close. They have very little health but can often catch players unaware. Attempting to move ahead will spawn a wave of bat bots behind you, and killing that wave will spawn another one with more bat bots and mouse bombs. Proceeding forth, there will be a decently tough fight involving all of the above robots. Stay away from vents as the mouse bombs will spawn inside them. Note: a viable strategy is to spawn the room, take out the Bat Bots, and let the Tread Bots come towards the explosive barrel so you can explode all the bots at once.

The Engineering room introduces lasers, which kill you upon contact. This area is mostly made up of Tread Bots in groups; however, there are some Bat Bots in the second to last room and added mouse bombs in the final one. A good strategy for this level is to stay at the starting area and throw the grenades in the general direction of the Tread Bots and Bat Bots.

The Bridge is an open area with a new enemy called Assassin Bots. They aim with a pink laser and deactivate, then shoot where the laser last was before it was turned off. They have high health but the battery pack on their back is a weak point. Shoot at it with a shotgun or rail gun for maximum damage. There will be waves of tread bots, bat bots, and a few mouse bombs with some assassin bots sprinkled in. Note: if you don't go in the rooms where the Mice Bots spawn, you don't have to worry about them. It should also be noted that a slightly easier but more frantic way to conquer this level is to stay by the entrance and let everything come to you. This method takes a shorter time but you have to deal with 2 Tread Bots and an Assassin Bot spawning in that same room.

Now there is the Flight Deck, a very large open room with little to no flooring, with a stationary space ship in the center. Pushing the large green button on the center console will play a small projector scene showing the spaceship flying through space and approaching the Jumbodome. This will also initiate a heavy attack from the bots starting at the place where the projector was, spawning tread bots, bat bots, and mouse bombs alike in different places. The best strategy is if you are duel-wielding shotguns, go to the first wave spawn point, take out the three Bat Bots as you can, then fall back and work with the rail gun to help you defeat the Tread Bots. Upon killing the last enemy, you will hear the automated voice say "Now arriving, all units please depart the escape vessel." Hearing this allows you to teleport to the next area.

Space is an area in which every sound, including mic communication between players, is muffled in an underwater-like way. There will be a horde of tread bots waiting for you, with an explosive barrel to their right side. Shooting it will kill all but 2. Moving ahead there will be lasers, tread bots and bat bots. Some bots will spawn behind you. Near the end you will encounter an elite tread bot. It shoots 5 fast orbs at the same time in different directions. There are a plethora of explosive barrels to help you. A good strategy is to grab the rail gun at the beginning of the level, spawn everything in the first room, and let everything come toward the explosive barrels. Doing this allows for the completion of this level to come much easier. Note: use the rail gun and laser pistols to stun the Elites.

The Hangar is a large open area, consisting of 2 large rooms, the first consisting of elite bat bots, which shoot in rapid bursts of 5, and regular bat bots. Staying near the spawn area is advised. The second room contains elite bat bots, elite tread bots, both of their normal counterparts, and some assassin bots. Some bots will spawn behind you. Killing all of the robots will as usual allow you to teleport to the next area.

The Supply room is the second to last room. The starting area has some extra guns, and the next rooms contain quite a bit of everything. Off to the side there is also a small room, containing a goblin (named Kevin by some of the community) and pot from the Quest for the Golden Trophy. A viable strategy is to spawn everything in the first room, fall back to the starting area, and use the explosive barrels to your advantage. As you progress through this level, multiple waves of enemies will spawn around including behind you. The final room of this level is by far the hardest room in the game since it has the most enemies ranging from Elites to Regulars and some Assassin Bots. However, the strategy still remains the same: using the explosive barrels to take out the waves as they're spawning in.

The final room is Jumbotron himself, in a large arena. He has 4 panels that you must destroy and he has an invincible turret below him that will target one of the players, preferably one who is not taking cover. It shoots streams of fast lasers. After a panel is destroyed, he will summon tread bots and bat bots (elite and normal) which will spawn in multiple points, so when you hear him yell "Reinforcements!", watch yourself. Upon destroying the four panels, it will destroy his turret and kill any enemies remaining in the room. You will get loot depending on the Quest Rating achieved by your team. 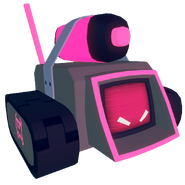 Mouse Bomb. Crawls up to you and explodes. Usually spawns in packs.

Assassin Bot. Charges a beam while targeting you and then fires after a short pause. Take cover or move when it disappears momentarily to avoid it. Vulnerable to shotgun and rail gun shots to the power port on the back.

Final team score is the cumulative score of each member and determines your Quest Rating which determines the rarity of loot you get after the last boss, so if you plan on beating the quest it is important for each player to have as high a score as possible.

There are only so many points, referred to as credits in this mode, that your team can possibly attain, but there are unlimited amounts that you can lose by dying or committing friendly fire.

Ways to obtain credits are by killing robots, destroying monitors, detonating explosive barrels, and destroying computer systems. Credits in Jumbotron differ from points in other quests in the way that they have to be picked up in order to add to your score.

The player that does the destruction is the only one that gets credits, except in the case of multiple peope damaging robots before they are killed, in which case the credits are split.

Every time a player is shot by a bot or hits a teammate (friendly fire), they lose 1200 credits.

If a player is prone to dying, it might benefit the team if that person did not destroy the breakable objects for the extra credits, because that is just more for them to lose, which hurts the whole team. Your score cannot go below zero, so if you have under 1200 credits and die, it is less harmful than if you have lots of credits and die.

Breaking a credit filled monitor will grant 50 credits to the player.

(Insert other credit information upon breaking or killing enemies here) 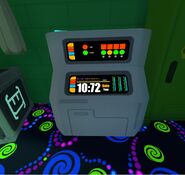 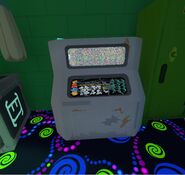 A small computer system that has already been destroyed 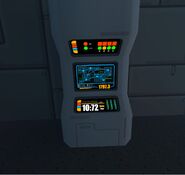