The Curse of the Crimson Cauldron is the 3rd Quest to be added into Rec Room. It is the sequel to the first quest, the Quest for the Golden Trophy.

In the #RecRoomOriginal room ^CrimsonCauldron, 1 to 4 players use medieval and fantasy weaponry to team up and fight through 9 acts of fantasy "monsters" put together by the art department. Successfully completing all 9 acts and defeating the final boss rewards each player with a chest containing one item from the Crimson Cauldron Cosmetic Sets, the rank of which is determined by your Quest Rating. The room ^CrimsonCauldron is a #pickup room, i.e., teleporting and "walking" VR players as well as Screen Mode players may play in the same room. 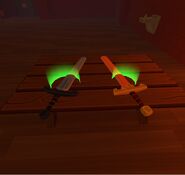 Swords, can be used one handed or dual wielded 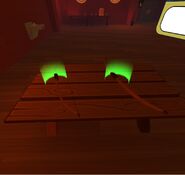 Bows, require one hand to hold and one to draw arrows 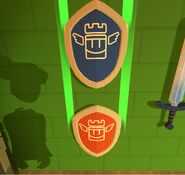 Shields, can be used one handed or dual wielded

Hunter (Manual) Crossbow, require one hand to hold and one to charge arrows 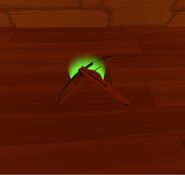 Automatic Crossbow, can be used one handed or dual wielded

Wand, can be used one handed or dual wielded

Red Barrel Knight, lowers axe and spins in a circle

Witch, fires large energy balls that can be reflected by a sword
Add a photo to this gallery

Scoring in the Curse of the Crimson Cauldron is very straightforward. Points are shown in the form of gold when you earn them. Contributing to killing an enemy gives you gold proportional to how much you contributed; although the game will often award additional points due to latency in the tracking of all players actions. Breaking pots also gives you gold, though significantly less than gold earned from killing enemies. All gold goes directly to your point total the moment you earn it.

At the end of the run, the total gold score of all teammates put together determines the Quest Rating of your team, and the reward rarity you get.

The final boss is the crimson witch/wizard at the top in the bell tower. To defeat him/her, you must use a sword to hit back the purple orbs he/she launches at you (similar to Paddleball) just like that you do to the other regular witches you encounter earlier. While fighting, various mobs will spawn around the arena, including cannon goblins on the battlements at the edge of the arena.

Retrieved from "https://rec-room.fandom.com/wiki/The_Curse_of_the_Crimson_Cauldron?oldid=18052"
Community content is available under CC-BY-SA unless otherwise noted.