In The Quest for the Golden Trophy, 1 to 4 players use medieval weaponry to team up and fight through 9 acts of fantasy "monsters" put together by the art department. Successfully completing all 9 acts and defeating the final boss rewards each player with a chest containing one item from the Golden Trophy Cosmetic Sets, the rank of which is determined by your Quest Rating.

The #RecRoomOriginal room ^GoldenTrophy is a #pickup room, i.e., teleporting and "walking" VR players as well as Screen Mode players may play in the same room.

The story of this quest is continued in The Curse of the Crimson Cauldron.

After gathering your team in front of the theater stage, one of you has to activate the "Start" button by pointing at it with a virtual laser pointer and pulling the trigger of your controller. You start your quest in a dressing room (similar to that of The Rise of Jumbotron) with a mirror on the left wall and some decor and gold pots, as well as 2 shields, 4 swords, and 2 bows on the back wall. Pick up your weapons and exit this room by gathering all players on the platform and teleporting through the door at the back wall. This will take you to:

ACT 1 contains sword-wielding goblins. Like all enemies, they will kill you in one hit, though you can block their swords with a shield. Hitting a goblin with an arrow knocks it over and renders it unconscious for a short moment. Dead players can be revived by a high five with a player who is still alive. However, if all players are dead, all is lost and the players will teleport back to the theater stage. The goblins appear in small groups, mainly as a way of guiding you into the game and how it works. You can smash the pots sitting around for extra gold. Multiple waves of goblins will spawn in the final room so caution is advised. Clearing the area of monsters will cause a distinct tune to sound which signifies that you can move on.

ACT 2 introduces imps, small creatures with a flying mechanism attached to them as well as a cannon that shoots slow fire orbs, similar to those of the tread bots in The Rise of Jumbotron. Like goblins, shooting them with an arrow renders them temporarily unconscious and makes them fall to the ground. Off to the right in the second room is a small room which contains 4 large pots and a crossbow, which is slower than the bow (it needs time to fully charge while you pull the trigger) but powerful, and only requires one hand to operate; thus, you can combine it with a sword, shield, or another crossbow in your other hand. There are a few waves of monsters and imps which will spawn behind you, so watch your back. Staying at the bottom of the ramp is an ok strategy because not many monsters spawn there but Imps and Goblins will spawn on top of the ramp and may overwhelm you.

ACT 3 features a large stone boulder that you can roll down ramps to kill groups of enemies. There isn't much to explain in this one. Just kill the monsters and make sure to keep an eye on the rooms behind you since some imps will spawn there.

ACT 4 is a large open room where the floor is mostly lava with some bridges. It also introduces barrel knights, a large goblin that wields a halberd. Barrel knights move slowly, pause to aim, then charge rapidly towards where they aimed at. They can be killed by hitting the target on their back multiple times with any weapon. Imps will spawn in the back area above the lava (they can be killed in one hit as they will fall into the lava), with goblins spawning from every side except for the exit door. This makes camping near the exit door a viable strategy; however, there isn't much space to hide in. The absolute best strategy for this is to spawn the first waves of Goblins and run back to the spawn area you have ample time to kill the Goblins and Imps.

ACT 5 is made of small rooms connected by corridors. It introduces the elite variants of the imps and goblins. The elite goblins do not take any knock back so archers may have trouble dealing with them. Elite imps will still fall to the ground upon getting hit; however, they shoot 5 fireballs at the same time in different directions. You have to kill the enemies in all corridors before you can go through the exit door; thus, you might have to go back and search the corridors for monsters. However, if you take out the Goblins from outside the left room, you don't have to worry about the red Goblins overwhelming you. Staying near the spawn point is advised as you have ample time to take out the Goblins and Imps.

ACT 6 is a library that has every enemy type spawning in waves in different rooms, as well as the elite variant of the barrel knight, which spins instead of charging. Caution is advised as they come from nearly every side including from behind you. Staying together in a corner is one possible strategy, but might get the whole team killed by a spinning barrel knight. It should be noted that there is not a single best place to be. A very possible strategy is to hop on a bookshelf. Do use this strategy with caution as the Barrel Knights and Imps can still hit you.

ACT 7 Is a maze like area, consisting of narrow passageways followed by small rooms filled with imps, goblins, and barrel knights with some red variants in the mix. The final room contains pots and red goblins and imps. Staying near the spawn area is advised as some Imps and Barrel Knights spawn in the back half of the level. This gives you ample time to take them out.

ACT 8 is a large open room that is half filled with lava and half normal wood. There will be nearly every type of enemy spawning everywhere except the exit area. Coordination is a must for this act as you can easily become overrun and lose.

ACT 9 is the final room, containing the goblin king! He is essentially a barrel knight wielding a large version of an imp cannon which fires 3 large orbs towards the player that is the closest. In order to defeat him, you must shoot the target on his back many times, which is almost impossible without the help of another player to the side to distract him. While fighting, various enemies will spawn in various corners of the room, so stay alert. Upon killing him all other enemies will die and each of the four players will receive a treasure chest, containing loot that is based on the Quest Rating of your team as explained next. Staying to the right of the Goblin King is advised as some enemies will spawn in the hallway and around you. 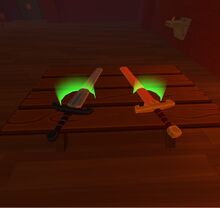 Sword (can be used one handed or dual wielded) 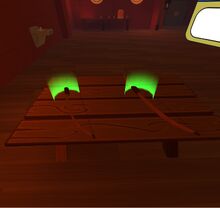 Bow (require one hand to hold and one to draw arrows) 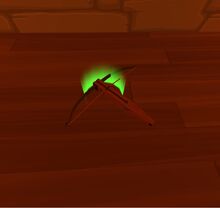 Crossbow (first found in Act 2, can be used one handed or dual wielded) 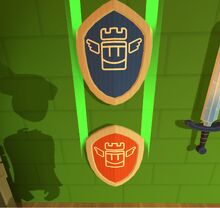 Shield (for use with sword or crossbow)

Scoring in Golden Trophy is very straightforward. Points pop up in the form of gold when you earn them.

Breaking pots (by hitting or dropping) gives you gold, though significantly less than gold earned from killing enemies. All gold goes directly to your point total the moment you earn it.

Contributing to killing an enemy gives you gold proportional to how much you contributed, although the game will often award additional points due to latency in the tracking of all players actions. Golden Trophy is comprised of seven different enemy variations.

Golden Trophy has several tunnels which if entered, will spawn additional enemies that the player will have to kill. Players can complete the level without spawning these enemies, however, the game will not award points for these enemies unless a player kills them. Additional enemies can be found in:

Just like Crimson Cauldron, Golden Trophy has a spot on act 7 which has a random chance of spawning additional enemies when in the maze section of the act.