A Murder Mystery social game mode created by players, i.e., it can be played in a plain Lounge room without any customization. (A Custom Room for playing the game is ^CoachsDinnerParty.)

The Coach has invited you to join their private dinner party! They even invited the sheriff to make sure everybody is safe. Mix and mingle and have a good time, but wait! Tragedy has struck and one of the guests was "murdered!"

Who saw them alive last? Did anyone see anything suspicious? Can the guests and sheriff work together to stop the murderer before they strike again, or are the guests doomed to be picked off one by one? Enter a Lounge with some of your friends! 16 players max, at least 6 is recommended. You can move some of the whiteboards to obstruct the view of the more open areas if you wish.

Everyone gathers around the card table and the host creates a hand of cards to randomly choose the roles. The roles are one Sheriff and at least one Killer. The rest of the players are Guests. The deck should have one card for each person, so for example one ace for the sheriff, two kings for two killers, and any random numbers for the remaining people. Any cards can be used as long as everyone is clear which card is which role. A whiteboard can be used to keep track.

Once the role deck is prepared, shake it until it vibrates meaning it has been shuffled, then carefully deal out one card to each person face down. Everyone should take care not to peek at other people's cards. Each person now carefully checks their own card to see what role they are, then places it back face down.

The Sheriff now announces their own role. Everyone else is assumed to be a guest for now. The Sheriff may carry a pop gun and/or wear a sticky note that identifies them as the Sheriff. This is the person responsible for dispatching the Killers. They are who the guests must convince, and the Killers must avoid and distract.

Now all the players go out into the lounge and have fun. Split into smaller groups and spread out. If there are too many people in one area, go somewhere else. If you are with the same people for too long, go talk to another person. The game doesn't work if the Killer doesn't get a chance to fulfill their role, and remember nobody has actually died yet so there is no reason to be worried!

If you are a Killer keep an eye on where everyone is and when they are moving. If you see the opportunity to meet with someone alone, do it. When you see a chance, you can commit "murder" by giving someone a thumbs down. Be sneaky, try not to let the guests see, but make certain the Sheriff doesn't​. Don't act suspicious about it, get their attention, give them the thumbs down then move on into another room before you get caught. Act natural, like you have been there the whole time.

If you are given the thumbs down, you are immediately dead! You can show this however you want, some people lay on the floor, or sprawl on furniture, or just hang your head and arms down. You can even just tell someone who comes in "I am a dead body" or answer yes if they ask you if you were murdered. Do NOT tell anyone who killed you, or how long ago you were killed, etc. Also do not move away from where you were killed right away, this is important information for the Sheriff and guests. After the body is discovered and people are made aware, the dead can move their position if they wish to have a better view of the action so they don't get bored, as long as it is clear they are dead and they do not interfere with the rest of the game. You may use sticky notes to help identify dead bodies.

At some point, somebody is going to find a victim. Let the sheriff know! If you are a killer, maybe YOU want to let the sheriff know, maybe not. After the first murder is discovered, the Sheriff should probably gather everyone together to discuss what happened. You can use the microphone to announce this.

The Sheriff is now trying to get to the bottom of things. The guests are afraid and trying to share what they know, and the killers are trying to cause confusion. Did a guest see someone near the victim before his demise? They should try to get the sheriff's attention and tell them. Were you with someone else when the murder happened so it couldn't be either of you? Try to let someone know!

If you are the Killer, try to form an alibi, try to divert attention from yourself, perhaps try to cover for another Killer. Remember, if a guest saw you, that doesn't mean it is over. Maybe you can say THEY are the Killer and are trying to frame you. Maybe you want to use that strategy yourself and say you saw someone else near the victim before they died. Maybe you have some other excuse that explains why you are totally not the Killer, be creative and stay alive!

If the Sheriff feels he has enough information to identify the Killer, he may shoot him with the pop gun (or just announce your decision.) If you successfully execute all the killers, everyone else (including murdered guests) win! You had better be sure though, because if you execute an innocent guest, the Killers immediately win.

It may be important to note that there is no point trying to escape your judgement. It is a social game, not an action game. Players cannot "escape" a kill by running away, if a Killer or the Sheriff chooses to kill someone, it is done by their decision, the action is a formality.

Perhaps the Sheriff has executed one of the Killers but there are still one or more Killers around, or perhaps the Sheriff was unable to make a decision. Either way, the game goes on! People are going to wander off from the meeting, or never showed up in the first place, or the Sheriff will disperse the crowd and everyone will go back to the party. Tensions are running high as people are still trying to enjoy the party when they can be murdered any minute! Guests and the Sheriff are going to be more observant now, but remember to stay spread out and keep moving from group to group and room to room every so often to give the Killers a chance.

The game continues in this fashion with the Killers attempting to pick off Guests and the Sheriff trying to figure out who the killer is. The game ends when one of the win conditions are fulfilled:

The Killers cannot kill the Sheriff!

To give a thumbs down, hold your controller so the thumb on your hand is either on the top or the bottom, then pull and hold the trigger until the thumb comes out. Some people find it easier to pull a thumbs up first and then flip it over.

Go with the flow. It is a social game where as long as people are having fun, everyone wins. If you are unsure on how to proceed in a situation, just do what feels right at the time. Don't try to strictly follow a set of rules.

Be creative! There are many versions of games like this, some with different roles and rules. Try out different rules and options and see what is more fun for you! Perhaps the Killer can kill the Sheriff and then another guest takes over the role or is voted in, for example.

Play the role, not the game, and remember that just because you are a guest does not mean you have a boring role. Make it fun! Maybe your guest is super paranoid and accuses everyone. Maybe your guest has a grudge against someone else, or is convinced of someones innocence. Perhaps your guest is an airhead and doesn't pay attention when someone dies right next to them, or is even evil and trying to help the Killers win!

The game works best if everyone is having fun, not trying too hard just to win.

Coach's Dinner Party was masterminded by Did you turn it to Wumbo? and Jack Merlyn. 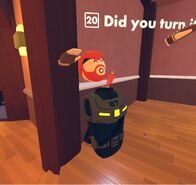 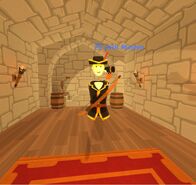 Special thanks to GasketCase, and everyone else that helped test it, Anthony, Solo, Minus, and the others that had to leave early.