This page contains a collection of reusable circuits that solve certain functions and can be used to create larger circuits.

We have no memory chips at the moment, but we can store values by forming a ring. The ring can be extended by more chips that modify the value. Note however, that rings larger than one chip can be affected by the Ring Evaluation Order issue, if they have more than one entry point to the ring. Ring stores should be designed in a way that they do not modify the value in the default state, only once when required (e.g. when the user presses a button). Otherwise they will continuously do so.

A random number generator chip in continuous mode can be used to hold a single value. Compared to ring stores, RNG stores are not affected by the Ring Evaluation Order issue, but do not provide native reset capabilities. So to be able to reset the value to 0, additional chips are required.

This circuit increments a number every time the button is pressed.

This circuit replaces the button output by arbitrary numbers. The example results in 3 when unpressed, and 7 when pressed.

A simple ring store can be used to convert a value pulse to a steady value signal. Dice for example output the rolled number for a single tick and then output 0 again.

However when you use the simple ring store, you have to be sure that there will be no new pulse until the old value is reset. Otherwise use this:

This circuit always stores the last non-zero value. This circuit can be affected by the Ring Evaluation Order issue.

This circuit performs the same function as the one above, see RNG Store for differences.

A delay chip can be used to convert a steady input to a single tick pulse. Every time the input changes, the delay outputs that value for a single tick and then outputs 0 again. It is worth noting that the delay chip does always delay the signal by exactly one tick, but up to five ticks.

This circuit does the same, but emits the pulse in the same tick that the value changes and outputs 0 in the second tick. It can be affected by the Ring Evaluation Order issue.

This circuit takes an input value from the left and copies it to the ring store on the right when a signal is triggered. The circuit can be affected by the Ring Evaluation Order issue. In that case the result is the same, but delayed by one tick.

This circuit performs the same function as the one above, see RNG Store for differences.

On and Off Switches

The button toggles the output between 0 and 1. Use this variant with caution: It keeps toggling as long as there is a 1 input. Therefore, only use 1-tick-long pulse signals to trigger it. However this behavior might also be useful when it is possible that two consecutive ticks trigger the toggle signal, with no 0 in between.

Separate Switches for On and Off

This circuit outputs a 1 pulse when a new room instance is created, or the room is saved or restored. This allows you to execute some initialization routines, e.g. moving a piston to a certain starting point.

Often you don't need 1 or 0 as a result of a logic comparison or Boolean operation, but 1 or -1.

Produces the absolute value of an arbitrary input.

The left ring is a placeholder for the current score. If the score is higher than the current high score, the high score is immediately adjusted. The circuit contains rings and therefore might be affected by the Ring Evaluation Order issue.

Whereas a Selector chip by itself chooses among 7 outputs, this circuit chooses among the 7 input pins of the Combinator chips and passes that input along to a single output. The green input pin of the Selector chip should receive a continuous value of 1. This is useful for choosing among ascertained Player or Object IDs.

If multiple conditions are met within the Selector chip, they are totaled together for the ultimate output (this is not desirable for Player or Object IDs).

The RNG chip can produce the same number twice, but it is often desirable that a random number generator will not repeat itself. This circuit assures that each generated number is different from the last.

On every roll, the range for the next roll is redefined as [<generated value> + 1, <generated value> + <range size> -1]. This effectively excludes the generated value as a possibility on the next roll since the lowest possible next value is higher. When the generated value exceeds the range, a modulo chip "loops back around" so that the actual value output is still within the range. Because of the modulo chip, the output range will always be [0, <range size> - 1]; to change the ultimate range (for example, to assure that all numbers will be nonzero values) use a Combinator chip after the output.

A simpler alternative for this function is to store the last generated value and re-roll the RNG chip if the generated value is equal to the previous value. The disadvantage of that solution is that it requires an unpredictable amount of additional circuit ticks.

Pressing the button begins a sequence of events. The events can occur at arbitrary times, configured in the Selector chip. Time is measured in circuit ticks (roughly 0.1 seconds). The pictured circuit will blink the top light at 0 seconds, the second light at 30 seconds, and the third light at 2 minutes (1200 ticks).

Note that time and circuit ticks diverge over time. If you need real time based events, use a timer chip instead and connect it's green output to the red selector input. This will not diverge from real time over time (except when looping), but only offer a 1 second accuracy.

Other events can be added to the remaining pins of the Selector, and the circuit will stop automatically after 3 minutes (1800 ticks). To create a looping sequence, simply connect the final event pin to the reset pin of the Combinator chip instead of the OR chip.

Sets the output to 1 when S is pressed and to 0 when R is pressed.

Like the RS Flip-Flop, but toggles the output state when C is triggered and J and K are 1. The circuit contains rings and therefore might be affected by the Ring Evaluation Order issue.

When you stop and restart gizmos in the maker pen menu they will reset, but often not to any meaningful state. The concept above allows you to detect the maker pen gizmo state and act upon that, e.g. reset some more states. The red output of the trigger zone outputs a pulse when gizmos are started, the blue one when the gizmos are stopped, and the green pin outputs a constant 1 while gizmos are active and 0 while they are stopped.

The official delay chip has a few characteristics that might not always be desired:

The above circuit delays the input unaltered by a single tick, and avoids all of the mentioned problems. This circuit exploits the Ring Evaluation Order problem to force the right chip to be evaluated before the input from the left is taken into account, which is therefore delayed by one tick.

This circuit generates a random permutation of 4 elements from the set {1, 2, 3, 4, 5, 6} . It evaluates in a single tick and can be adjusted to support larger sets without increasing the size of the circuit as long as only 4 elements are randomly selected from the set.

The circuit can be simplified if only picking 4 elements from a set, {1, 2, 3, 4} the bottom lower left variable chip can be deleted and the top lower left variable chip should be adjusted to be 5, 4, and 3 for the red, green, and blue pins respectively. The RNG chip in the upper right can be replaced with a variable input of 1, since the RNG chip would otherwise never generate anything but 1. The resulting simplified circuit looks as follows:

The functionality of this circuit is based on the Lehmer Code representation of permutations where the 3 variable chips pick a random number for the digit in the code and then the following function is used to generate the permutation from that code:

For each entry x, in order from right to left, correct the items to its right by adding 1 to all those (currently) greater than or equal to x; finally interpret the resulting permutation of {0, 1, … n − 1} as sequence numbers (which amounts to adding 1 to each entry if a permutation of {1, 2, … n} is sought).

Expanding the circuit to support picking more than 4 elements is possible by expanding the current pattern of chips at a cost of O(n2).

Click here for an interactive demo of the circuit. The circuit is available in the invention store under the titled: "Permutation Circuit".

The stage light changes color to a different color every second. The color sequence is fixed.

The stage light changes color to a random color every second. You can replace the Random chip by a Non-Repeating Random Number Generator if you want to make sure the color changes every tick.

This circuit will respawn any player hit by a weapon. At least one respawn point from the sandbox has to be present in order for the player to respawn.

This circuit will respawn a player that has been hit if they are not the attacker.

This circuit will respawn a player that has been hit if the attacker is on the opposing team.

Instantly teleports the player who pressed the button the spawn point.

Teleports the player who pressed the button to a randomly selected spawn point.

The buttons can of course be replaced by goals. Each button that is pressed activates the next one. When the last button is pressed, it outputs 1 for a short time to the lower output, increments the lap counter at the top and resets all buttons.

The number of checkpoints can be extended by repeating the sequence of button 2 (button, AND, Plus). 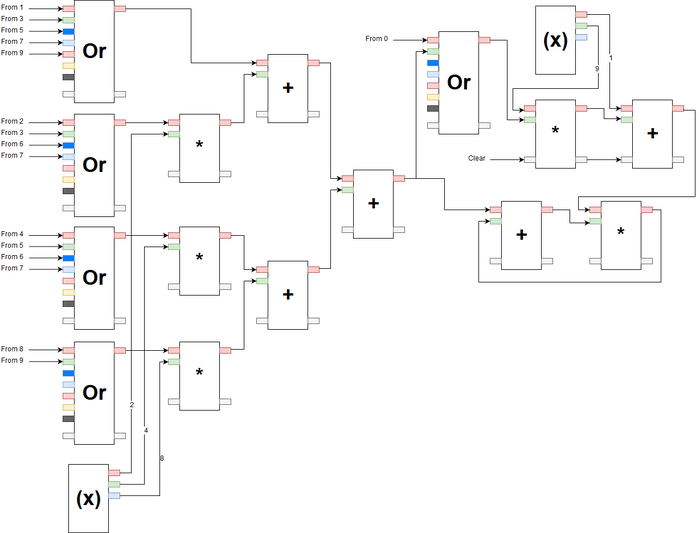 This circuit realizes an integer input field, using one button per digit. It could be used for example to create a calculator or a door pin code.

The "From [number]" lines indicate a connection to a button with that number. Each OR chip on the left represents one digit in the binary representation button number. Therefore a button can be connected to multiple chips.

Implementation Note: This circuit can be affected by the Ring Evaluation Order issue.

A simple HP tracking implementation, in an elimination-style fashion. 250 HP are assigned to every player on game start, once a player reaches 0 HP he dies and cannot move anymore until the game ends. Note that there is no game end condition.

The currently most complete demonstration of what can be done can be found in the ^testhp4 room. If you are planning to create a room in the Maker Room and use some kind of HP management, chances are good that the demo supports that. It is fully configurable with variable chips, so you can request to clone it and might save some work.

It is surprisingly hard to create a smooth waving motion with the wave chip, although it appears to be designed to do exactly that. This circuit makes a rotator wave smoothly in a sine fashion from -45° to 45°. It is self-stabilizing and does not run out of those bounds over time. The circuit contains rings and therefore might be affected by the Ring Evaluation Order issue.

This specific clock will not display hours, but instead shows the number of minutes regardless of whether there are more than 60. An hour display is possible using a circuit that is analogous but more complicated.

Feel free to add more diagrams to this page.

Different people have created templates that you can use to draw circuit diagrams if you like:

Alternatively, you can use the Rec Room Circuit Simulator (RRCS) to draw circuit diagrams.