Junior accounts (mandatory for children 12 years of age or younger) are limited in several ways, in particular, they cannot receive nor transmit audio, and can only use the maker pen in their dorm room. See the official Rec Room support article for more information.

Virtual Reality sickness: If you are new to VR or if you know that you are susceptible to VR sickness, use only teleporting for in-game movements, do not use walking nor flying. Also, stop walking and flying if you experience any discomfort or other signs of VR sickness. 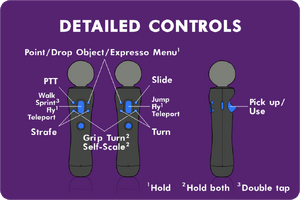 Functions of buttons of Move controllers in Rec Room. Start button (in the side view) recenters the playspace and allows to recalibrate the height. 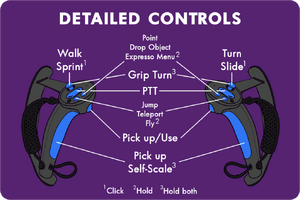 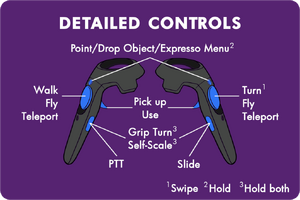 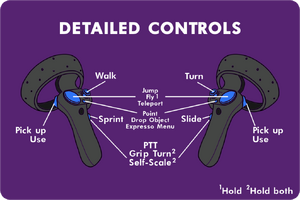 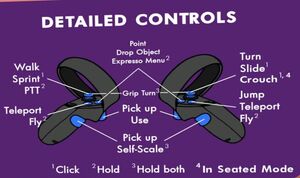 Functions of the Oculus Touch controllers in Rec Room

*See the Gameplay settings in the Watch Menu for options; in particular to switch between teleporting and walking. Note that walking and flying can cause VR sickness.

**See Gestures for information about flying and self-scaling.

***PTT is (de)activated in the Audio settings of the Watch Menu.

To open the Watch Menu, rotate one of the controllers as if you look at a watch.

If "Tap watch to open menu" is checked in the Experience settings of the Watch Menu, then you have to rotate the controller and tap the watch with the other hand. Alternatively, use Expresso to open the Watch Menu as described below.

One way to mute, report and vote-kick a player is the talk-to-the-hand gesture. (Alternatively, select the player in the "Nearby" or "Recent" tabs of the People Menu of the Watch Menu and use the relevant button.)

To see the profile page of players (and some objects), click the "drop" button with a hand that doesn't hold anything (the "drop" button is the Menu button on HTC Vive and WMR, the Y/B button on Oculus, and the Square/Triangle button on PSVR), then point at a player or object and pull the trigger. This is particularly useful to mute, report, and vote-kick players. See the Comfort and Safety page by Rec Room Inc. for more details.

Friending: To become Rec Room friends with another player, shake hands while slightly pulling the trigger. Alternatively, select the player in the "Nearby" or "Recent" tabs of the People Menu of the Watch Menu and use the "Friend" button.

Cheering: To send a Cheer to another player, show a thumbs-up gesture to the player by pulling the trigger long enough. Then select the kind of Cheer on your Watch Menu.

Flying is not available in all games/rooms since it breaks the gameplay of most games and can cause VR sickness. In Custom Rooms, flying has to be activated for Roles, which have to be assigned to players, e.g., by auto-assigning them to Permissions. To toggle flying on/off when walking, double tap the "jump" button. When walking or if "Legacy Flying" is activated in the settings, point one controller up and hold down its "teleport button" until a ring has formed around the wrist of your hand; tap the teleport button on the same controller to continue (and pause) flying; use the teleport button of the other controller to teleport onto the ground, which stops flying mode.

Share cam gesture: Hold up both hands like you're telling me how big of a fish you caught. Then pull both triggers. This will summon your camera and immediately take a photo.

Self-scaling gesture: Self-scaling allows you to change the size of your avatar while you hold a maker pen. First, check the "Enable Self Scaling" checkbox in the Settings of the Maker Pen. Then, with a maker pen in your hand, hold both grip buttons simultaneously on HTC Vive, Oculus, and WMR headsets or the lower, inner face buttons on PSVR and move your hands towards each other or away from each other to change your scale. (This is an experimental feature and doesn't work yet in Screen Mode.) (Update, now works with screen mode)

The "Expresso" system gives you temporary control over your avatar's facial expression.

To use Expresso, press and hold the Menu button on HTC Vive and WMR, the Y/B button on Oculus or the upper, outer button of your walking hand on PSVR. When the start menu of Expresso appears, move your hand into the submenus to find the item that you want to activate. The gallery shows all menus of Expresso; the starting point is labelled "start menu."